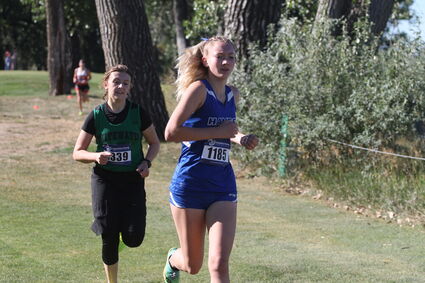 Havre's Jayla Meldrum runs at the Havre Invitational at Prairie Farms Golf Course last weekend. The Havre High cross country teams will next run in the Scottie Invitational in Glasgow this Saturday.

Another weekend, another road trip for the Havre High cross country teams. This Saturday, the Blue Ponies will head to Fort Peck for the Scottie Invitational. At this meet, the Ponies will compete against teams they have already faced as well as teams they will face later in the season, so HHS head coach Erin Lynch expects a competitive and illuminating meet for the Ponies.

"We're going to have some of the same teams we saw this weekend so there will be some pretty decent runners out there," Lynch said. "It'll be a good matchup and a little bit of a preview for our divisional meet."

At the meet, the Ponies will run against teams such as Chinook, Fort Benton, Harlem, Hays-Lodge Pole and Rocky Boy. The Ponies will also compete against Brockton, Culbertson, Dodson, Frazer, Glasgow, Hinsdale, Malta, Nashua, Poplar, Richey-Lambert, Scobey, Westby-Grenora, Whitewater and Wolf Point. Lynch most looks forward to running against Miles City to see how the two squads compare.

This weekend's course will have its fair share of obstacles for the Ponies. Lynch has trained her runners to run on hills, so a flatter course might throw them a curveball.

"This course is notorious for being relatively flatter than the one here at Prairie Farms," Lynch said. "We'll be running in a lot more of an exposed area and cacti are our obstacles this weekend."

Several Ponies will look to continue their strong starts to the season. In both of his first two meets this fall, Caleb Tomac has finished second, including a season record of 16:52.6 at last week's Havre Invitational.

From the HHS girls team, Hailey Gingery is looking for another strong race. She has finished in the top 10 of both of her meets this season, including a fourth-place meet at the Havre Invitational where she made a personal record of 20:29.3.

Jayla Meldrum will look to improve on her time of 21:53.55 at the Havre Invitational that earned her a seventh-place finish in the meet. Paige Anderson, Clara Haslem and Hannah Kinsella finished in the 10th, 11th and 12th spots in the Havre Invitational which helped the Ponies win their meet, so they hope to carry that into this weekend's meet.

It is still early in the season, but Lynch has liked what she has seen from her runners so far. However, there will be plenty of competition before the postseason in October, so Lynch hopes to see continued improvement this week in Fort Peck.

"I'm expecting to see most of the kids set another personal record this weekend," Lynch said.

The HHS cross country teams will run in the Scottie Invitational in Fort Peck this Saturday starting at 10 a.m.