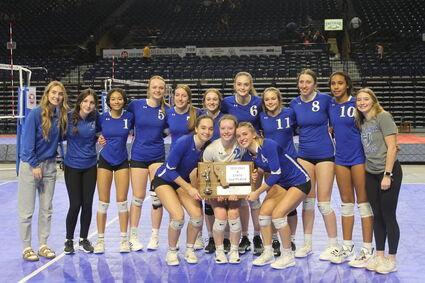 The Havre High volleyball team finished second in the State Class A Volleyball Tournament in Bozeman after losing in three sets to Billings Central in the state title match Saturday afternoon. To make it a winner-take-all match for the state title, the Blue Ponies won four elimination matches through Friday and Saturday.

It was a long weekend for the Havre High volleyball team in Bozeman. After a loss early in the State Class A Tournament, the Blue Ponies went on a run against some tough competition to force a winner-take-all championship match against Billings Central at Brick Breeden Fieldhouse Saturday afternoon.

But the Ponies' weekend came to a disappointing end with a loss in three sets (25-19, 25-20, 25-19) to Billings Central in the state title match. While it was not how the Ponies wanted to end the season, HHS head coach Stephanie Huse was proud of her team for what they accomplished this year....