Brewery to open in Havre 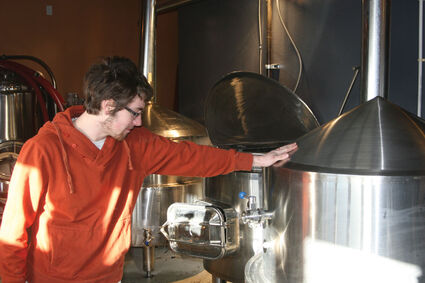 Mike Garrity, co-owner of Triple Dog Brewing Company, explains the process for making his beer Tuesday, and shows off some of the new equipment he had shipped in February.

Havre will soon be able join the ranks of Whitefish and Missoula as towns that can boast their own local brands of beer.

Mike and Erin Garrity have had Triple Dog Brewing Company in the works for years. It will be open by the end of March.

When asked why they decided to open a brewery, Erin said "we love beer."

Mike has been brewing beer since he was 19. What began in his garage has developed into a full-fledged operation housed in the new home of Triple Dog Brewery. He said he knew he wanted to open a brewery when he was 21, when he visited Kettle House Brewing Company in Missoula. The atmosphere and the style of the taproom, mixed with his own passion for brewing, inspired him to found his own.

"It just feels like a different culture," Erin said.

Mike said this jump from his personal garage brews to the professional-grade equipment he is using now was not that difficult, as the concepts are still the same, but it is different.

"Garage brewing is a little more relaxed," Mike said. "When you're doing it retail, you have to make sure it's perfect. You find yourself constantly busy. You gotta hit all your marks."

Mike said he spends an entire day making one batch of a beer with his new equipment with larger capacity, when he used to spend just a couple hours.

He plans on having four beers on tap when they open:

• Duckface IPA, with an alcoholic content of around 9.3 percent

• American Mutt Pale Ale with an AC around 6.9 percent

• Fresno Wheat with an AC around 4.6 percent

• Dumpster Diver Stout with an AC around 6 percent.

"We hope to have seven in a couple months," Mike said. He added that he is also going to make seasonal brews, beginning with a hefeweizen for spring.

The Garritys have been trying to open their brewery for two years. Most of this time was spent going through paperwork, acquiring their Montana brewer's license and just trying to get the ball rolling on their new business.

"We've talked and and talked about it," Erin said. "Then we were just tired of waiting."

They were able to buy the 1st Street West building and begin construction on it in April. With the help of family and friends, they have been working on it ever since.

"We had to gut the whole thing, pretty much from scratch," Mike said.

Mike said there will only be beer sold at Triple Dog Brewing Co. - no wine, spirits or food. He said they do not have a license to sell food, but people are allowed to bring in food if they would like to.

The Garritys are hoping to have the taproom's opening day March 28, but ultimately, "it's all up to the yeast."

"It's about time," Erin said. "We're extremely excited to be opening."

The taproom just needs a little polishing and minor work before they open, they said. The Garritys, with much help from their families, completely remodeled the old veterinary office to achieve the laid-back and open atmosphere they want for the taproom. The tables and bar have a full view of the equipment used to make their beer just feet away from where patrons sit. They are also importing a piece of Chinook to incorporate into their bar. A part of the bowling alley from the Chinook Eagles Club is going to be installed at the bar to form the bar top.

"It's a place you can come to after work and just relax," Mike said. "All these towns in Montana are getting breweries, which is awesome. We wanted to bring one to Havre. Havre needed something different." 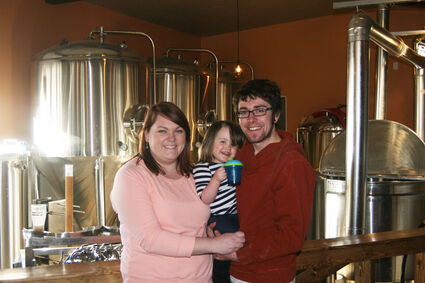 Erin Garrity, Mike Garrity, and their daughter, future brewmaster Parker Garrity, pose for a photo in front of the brewing beer that Havre will soon be able to buy at Triple Dog Brewing Company.

Erin said they would like to showcase local artists at their business and provide Havreites a different kind of place to go to enjoy themselves. The Garritys want an emphasis on local business at their taproom.

"It's a big part of breweries and what we stand for - local," Mike said.

Eventually, Mike will be selling kegs of his beer to local establishments and restaurants. There will also be growlers - refillable, half-gallon jugs - sold at the taproom.

The young couple are native Hi-Liners. Mike, 25, has lived in Havre most of his life and Erin, 24, is originally from Chinook.

Whooppee, just what Havre needs. Yet another alcoholic joint for people of Havre to get behind the wheel and drive the streets of Havre back home.