MAT youth workshops are up and rolling 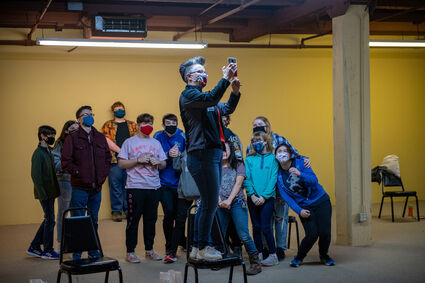 Montana Actor's Theatre Youth Theater Director Angela Pratt takes a photograph of herself and youths at the first theater camp of the season in The Ryan Building Monday.

The workshops will teach the basics of theater over the next year. The workshops will include auditioning, character development and basic movement; costume design and construction; intro to classical theatre, Shakespeare, and stage fighting; one acts: writing, development, and performances; light and sound; intro to puppetry; and prosthetics and makeup.

"It is giving the students just another chance to experience theatre in all the ways that th...