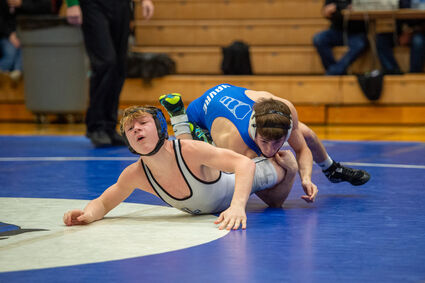 Havre High senior Mick Chagnon, top takes down a Libby opponent during the Ponies' last home dual in January. Chagnon and the Ponies will wrestle at home for the final time when they have duals Friday and Saturday.

As the shortened Havre High wrestling season nears its end, it's time for the Blue Ponies to honor their seniors. HHS will do so Saturday at the HHS gymnasium as they host Lewistown and Billings Central in a pair of dual meets.

The Ponies will also host Simms Friday night at the Havre Middle School. Laurel was also set to wrestle the Ponies Friday, but the Locomotives won't make the trip to Havre.

Still, regrdless of the opponents, it will be a special weekend for the Ponies.

The Ponies will have to rely on their senior wrestlers, Mick Chagnon and Hunter Velk, for leadership as they hea...