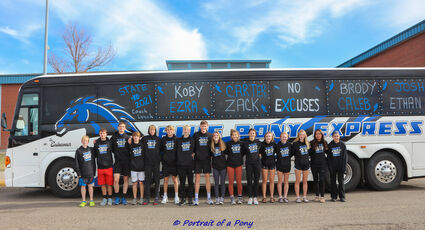 The Havre High cross country teams at the Class A state meet in Missoula on Saturday. The HHS girls' team took 12th at the meet while the HHS boys' team finished 13th.

After a long season, the Havre High cross country teams finally competed in the big race this past Saturday at the Class A state meet in Missoula. In the biggest meet of the season, the HHS girls team took 12th while the HHS boys team finished 13th at the meet.

It was the second time this season that the Blue Ponies ran at the University of Montana Golf Course as they competed at the Mountain West Classic last month. With this being their second time on the course, HHS head coach Erin Lynch believes her team ran well to finish the season.

"Most of the kids bested their time on this course from their previous time on this season so I was happy to see that," Lynch said.

However the conditions in Missoula were less than ideal. It had rained the night before so the course was slick with some puddles. At the same time, the ground was still hard packed in places to make the course uneven.

"(They handled it) as best as they could," Lynch said. "I was hoping for some more PRs but given the conditions, I'm alright with how they did."

Hailey Gingery had the best finish for the Ponies as she took 31st at the meet with a time of 22:03.11. Emma Gillen took 57th with a time of 23:28.91 while Jayla Meldrum, Nevaeh Phillips and Clara Haslem finished right next to each other in 74th, 75th and 76th, respectively.

Havre was not the only Hi-Line school competing in a state meet in Missoula as Rocky Boy and Harlem competed in the State B meet while Box Elder, Fort Benton and Hays-Lodge Pole ran in the Class C meet. Harlem's Taya Trottier earned All-State honors as she placed 12th in the Class B meet with a time of 21:05.28.

The state meet also caps the end of Lynch's first season leading the HHS cross country program as head coach. She and her runners are already planning offseason training so her next season cannot come soon enough. As she looks back on her first season, Lynch was proud to see her runners improve over the year.

The HHS boys' team saw improvement as seven members now run times less than 20 minutes. Tomac was able to drop his times to below 17 over the course of the season and Henry reached below 19. Zack May was also able to drop below 19 but he was not able to showcase that at the state meet because an injury prevented him from finishing.

Lynch also noticed improvement in the HHS girls' team over the season. At the beginning of the year, the top two runners ran in the 24-minute range but one got her time to below 21 and five other scoring runners improved their times to below 24 minutes.

"I was really proud of the personal improvements that I witnessed in the kids over the course of the season," Lynch said. "A lot of them developed a different mindset when it came to their races and how that mindset drove them forward into the times they were running towards the end of the year."