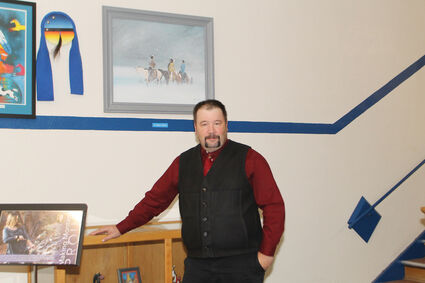 Havre Assistant Superintendent Brad Moore poses for a photograph in the Robins School Administration Building. Moore, who was superintendent of Standford school district in 2020 and is in his first year in Havre, was selected as this year's Montana Superintendent of the Year.

Moore said he found out about receiving this award at last Thursday's Montana Conference of Educational Leadership, and he's overwhelmed and proud to have received this recognition from his peers.

"For one of the few times in my career, I was pretty speechless," he said.

Moore only recently took his position as Havre's assistant superintendent, but has 16 years of experience as a superintendent in the state and said he has no intention of stoping any time soon.

Over those 16 years, he said, he's worked with great teachers, boards and communities throughout Montana and working with those people is part of what makes his job great.

"That's why I'm still at it and it's still very rewarding," he said.

Moore said he's been adjusting to Havre well so far.

He said due to the size of the district the learning curve has been a bit steep, but it has also afforded him more of a chance to focus his efforts on the traditional roles of a superintendent.

He said he mostly has worked in Class C districts and it wasn't uncommon for him to fill roles outside the traditional duties of a superintendent, having been everything from a long-term substitute teacher to a school boiler oeprator.

Moore said this is actually fairly common for superintendents in smaller school districts, but the size of the staff at Havre Public Schools has allowed him to focus more on the traditional roles of a superintendent, and it's been nice not having to be the jack-of-all-trades.

He said having that many people to bounce ideas off of and work with has also been great.

Moore said he'll be honored to represent Montana at the National Conference on Education in Nashville, Tennessee, early next year where he will be considered for national superintendent of the year.