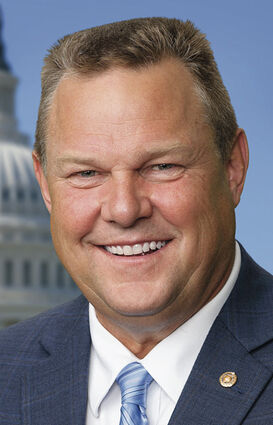 Sen. Jon Tester, D-Mont., held a press conference Monday to discuss a massive $1.2 trillion infrastructure package that he and his colleagues have been working to get passed for months, one that was signed by President Joe Biden later that day.

Biden signed the bill with Tester and many other legislators who worked on the bill present including many Republicans.

"Today, we will take a huge step forward to repairing our state's crumbling infrastructure," Tester said at the press conference before the signing.

"This is one of the best days I've had in Washington D.C., it truly is," he later added.

Tester said the bill includes $3 billion for Montana roads, bridges and highways, which will strengthen the economy by making travel and transportation easier on businesses and workers, $144 million for airports making travel smoother and safer, and hundreds of millions for rural water projects including up to $100 million for Milk River projects such as the St. Mary Diversion.

The more-than-a-century-old diversion, which supplies much of the water in the Milk River each year, is in danger of catastrophic failure and had to be stopped last summer when a drop structure failed and had to be replaced.

Tester said this $100 million will help irrigators in northern Montana get a much needed leg up and his office kept an eye on that aspect of the bill at all times to make sure it stayed in there.

"The Milk River projects ... are critically important for the northern tier of Montana," Tester said.

He said the bill also includes funds that will help get high-speed internet to every area of the state, which can be used for distanced learning, telehealth and remote work.

Funds for wildfire preparation and response are also included, he said.

Tester said that when he was a child growing up on the family farm outside of Big Sandy, he remembers his parents always having to drive on one particular pothole-filled dirt road for business until the final stretch was finally paved and accessed the highway.

He said he remembers his parents were thrilled because it meant they would save a whole lot of time traveling for their business and save them a great deal of money on car repairs.

"As I still drive that old paved road, I'm thankful," he said.

However, Tester said, these roads just haven't had the same attention as they did during his parents' and grandparents' time, and the results are clear every time he drives through the state.

He said all of this, accompanied by a continued lack of internet access across the state and outdated water systems, are holding people back economically.

He said Washington has kicked the can down the road on infrastructure for decades with neither party really taking the matter seriously enough to get results, until now.

Tester said he's proud to have worked with Republicans and Democrats to get this once-in-a-lifetime legislation drawn up and passed, a level of bipartisanship that Montanans expect from their politicians.

"It wasn't easy, but nothing worth doing ever is," he said.

Beyond the bill's obvious effects of improving infrastructure for everyone and lowering cost for Montana business and decreasing inflation, Tester said, the bill is estimated to create more than 800,000 high-paying jobs across the country and requires that materials used in the projects be made in the U.S.

He said the bill and the improvements it brings will further streamline the U.S.' economy and help the country maintain an advantage over its greatest rival, China, without raising taxes on Montana families.

He said the money this bill makes available needs to get out the door as soon as possible and he suspects it will be usable by the time construction season resumes in the spring.

When it comes to the funds for broadband internet access, Tester said he suspects rural cooperatives will likely see a lot of that money.

He said these funds will be competitive but co-ops in rural Montana have a long history of competence and he thinks it won't be hard for them to get their hands on some of that money to improve their areas' internet access.

When asked if he was concerned that the ongoing labor shortage in the U.S. would affect progress on the improvements the bill aims facilitate, Tester said construction jobs like the ones the bill will create are generally high-paying so he doesn't think it will be a huge problem.

Sen. Steve Daines, R-Mont., criticized the infrastructure bill when asked about it later that day in a press conference he held about a recent trade mission to India.

He said he voted against the bill because it included too many things that aren't traditional or "real" infrastructure, as well as things like electric vehicle charging stations which he implied were unnecessary in Montana.

He also said the bill has not been paid for, which the authors of the bill have repeatedly disputed.

At his own press conference, Tester said he also hopes investments in improving access to child care and affordable housing in the Democrats' social spending program - called The Build Back Better Plan - which is still being hashed out in Congress, will bring more people back to the workforce.

He said he thinks the spending package should focus on increasing the supply of houses, and invest in fighting climate change by devoting money to research and development aimed at making alternative energy sources more affordable.

He said the program is far from being ready for prime time but he is hopeful.

Daines in his press conference also criticized the social spending package, describing it as reckless.