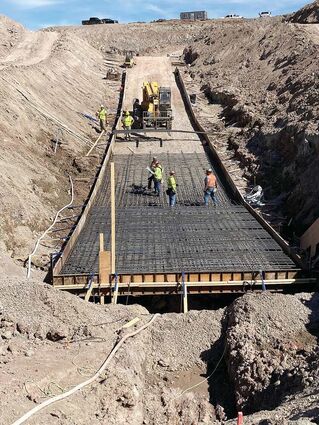 Work proceeds on Drop 2 in the St. Mary Diversion and Conveyance Works in July, 2020, on the Blackfeet Indian Reservation. Sen. Jon Tester said $100 million that can be used on the diversion being included in the bipartisan infrastructure bill with no match requirement is huge for the Milk River Valley in Montana.

Sen. Jon Tester, D-Mont., said in an interview with Havre Daily News that getting $100 million in funding that likely will go to the St. Mary Diversion is a really big deal.

"It will be massive," he said. "... It's a big deal. The most important part, really, is the predictability it provides for agriculture and municipalities."

Tester, one of the senators who crafted the bipartisan infrastructure bill that has passed Congress and been signed into law by President Joe Biden, also said it has been a long time coming.