Business makes $1,600 donation to Boys & Girls Club of the Hi-Line; it's estimated that one in every four kids is food insecure – and not sure where their next meal is coming from 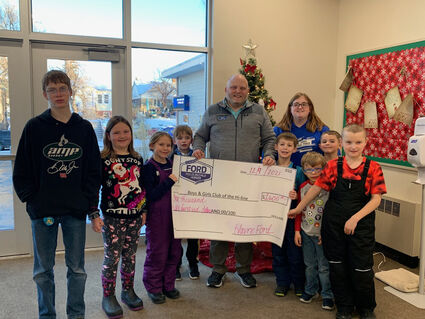 Havre Ford and the Ford Motor Company Fund want to ensure that kids don't go hungry this holiday season. Havre Ford recently presented the Boys & Girls Club of the Hi-Line with a check for $1,600 to help feed kids during the holidays.

As part of the Ford Focus on Child Hunger campaign, Ford partners with local Ford dealers to donate $100,000 to the Boys & Girls Clubs of Montana, Alaska, northern Idaho, Oregon and Washington. This donation is in response to the increased demand for nutritious meals during the holidays, when many children lose access to school nutrition programs. It is estimated that nearly 24 percent of children are unsure how their next meal will be provided. Experts think that number could double this year.

The Ford Fund granted $1,100 to the Boys & Girls Club of the Hi-Line. The money will be used to provide meals and snacks at the club during the holiday season. The Havre club is one of 65 clubs across the five-state region to receive funds from Ford.

"This has been a challenging year and we try to help out where we can," Steve Steinmetz, general manager at Havre Ford. "It's great knowing we can do something to help make sure kids aren't going to bed with an empty stomach."

Over the last seven years the Ford Focus on Child Hunger has donated more than $6 million to clubs, providing more than 10 million meals to regional programs.

"We are so thankful to Havre Ford. The holiday season means extra stress for many families, especially this year, when many people are struggling with illness, unemployment, or worse," said Tim Brurud, executive director of the Boys & Girls Club. "Thank you to Havre Ford for helping us keep hungry kids fed during the holidays."