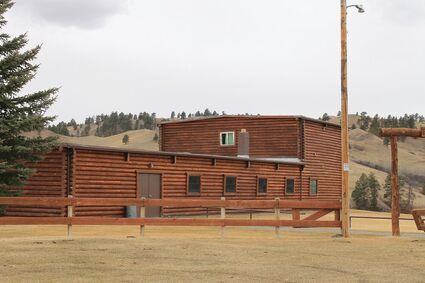 The Beaver Lodge stands on a hill overlooking Camp Kiwanis in Beaver Creek Park. Friends of Beaver Creek Park is kicking off a fundraising raffle to help pay for hundreds of thousands of dollars worth of work needed to repair and upgrade the iconic lodge.

Friends of Beaver Creek Park will hold their kickoff event Saturday for the Save the Lodge fundraiser a raffle the organization is running to help pay for repairs and updates to the Camp Kiwanis Beaver Lodge in Beaver Creek Park.

Between recent damage to the roof and ongoing wall shifting, the lodge has been in need of updates and repairs for some time, a project that will cost hundreds of thousands of dollars.

The park has put in for a grant that would cover much of this project but, as always, Friends of Beaver Creek Park is working to raise funds throughout the year to pay for as much of the project as possible.

"People have gotten married out there, they've had camps out there, meetings have been held out there, it just needs to be updated," Ursula Brese of Friends of Beaver Creek Park said.

Brese said the project will also update the building's bathrooms and kitchen.

She said the Save the Lodge fundraiser will be a raffle with $4,000 as the first prize, half a beef for second prize, and a rifle with a scope attachment as its third prize.

She said they're also working on getting 10 or 15 other prizes set up after that.

So far, Brese said, the raffle has already attracted a lot of people even before it started.

"I've sold 300 tickets and I don't even have the tickets yet," she said in an interview earlier this month.

She said Friends will also be selling tickets, at $20 a piece with six tickets for $100, for the raffle at Havre businesses, at their booth during the Great Northern Fair, at another event in May, and at Shakespeare in Beaver Creek Park later this year.

Brese said the organization would normally do a dinner to fundraise, but with the pandemic still going on they decided to take it easy this year and try something different.

As for this year's fundraiser, she said she's confident in the people of Hill County and their passion for the lodge, so that they will do everything they can to see this project happen.

"Everybody loves the Bear Paws, and that lodge to me is an icon," she said.