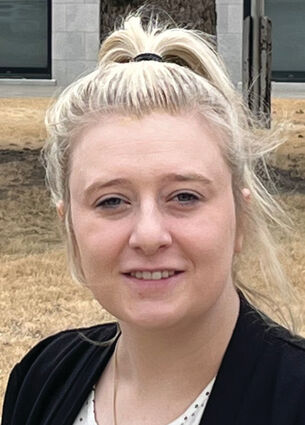 Dixon is originally from Phoenix but has been visiting Montana since 2012 and moved to the state in 2017.

She said she began with the Clerk and Recorder's office in April of last year and has since gained at least some experience in everything the office does, from land surveys to issuing death certificates to budgets and elections.

"I do a little bit of everything in the office," she said.

Dixon said this wide range of experience, as well as how she got it, will be an asset to her should she be elected.

She said she was hired during a somewhat tumultuous time for the office in terms of staffing so she had to hit the ground running, quickly learning all the things the office deals with, so she can learn quickly.

At the moment, Dixon said, she's working on the county's yearly audit, and in general handles a lot of accounting.

She said she also has some experience with elections, something she said the office handles with integrity, transparency and competence.

She said the office is always happy to show people how the process works and address any concerns they have, but she knows first-hand that the people who run the elections know what they are doing.

In general, she said, she thinks she will be very good at working with the public, though most of the people who come into the office would see someone else at the desk before her, as the clerk and recorder typically doesn't come to the front of the office unless being asked for specifically.

Dixon said she may not have the educational background people might expect of a potential clerk and recorder, but even before her time at the county she worked at Northern Montana Care Center for two years as head clerk, so she has experience and office management skills, including the ability to take charge when needed.

She said she already works very closely with Hill County Treasurer Sandy Brown and has no problem coordinating with other departments on the various issues that the courthouse deals with.

She said she doesn't have plans to implement huge changes at the office at the moment, but one area of improvement she'd like to work on is coordination between county departments, which she believes is somewhat lacking at the moment.

"I love everyone I work with," Dixon said. " ... We all get along great. Everyone is very knowledgable they learn fast. The only big thing I see is communication (with other departments)."

She said the lack of communication is often understandable, as the courthouse can some times be a chaotic work environment by nature, but it is still an area she thinks can be improved.