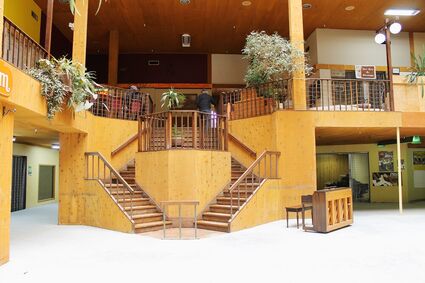 People stand at the top of the stairwell that leads to the newly replaced floor on the bottom level of The Atrium Mall.

The Atrium Shopping Mall has been undergoing remodeling on its lower floor since late last year, a $250,000 project that owner Dave Shaw has been wanting to do for almost two decades.

"I fantasized about doing this when I bought the building 18 years ago," Shaw said. "As soon as I could do something with the floor down here, to level it, I was gonna do it."

He said he and his wife Kris began the remodeling last year by pulling out the old bathrooms on the lower floor and have been working their way through the area since.

He also said the remodeling is being done for practical and aesthe...