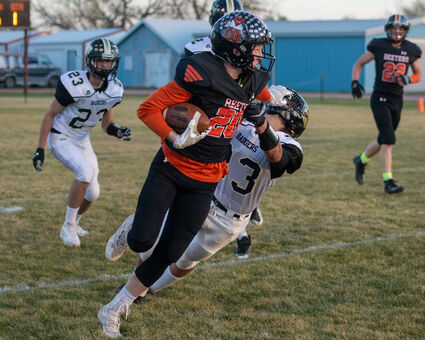 Chinook's Drake Berreth is one of three local standouts to have recently signed with the MSU-Northern football team for next fall.

In his first offseason as the leader of the Montana State University-Northern football program, head coach Jerome Souers is looking to build a roster that builds the team he envisions. After a few months of recruiting, Souers and the Lights have now announced their first signing class of 20 student-athletes.

While the Lights missed on the regular recruiting cycle with signing day back in February, Souers believes he and his staff were able to find good football players for the program.

"We were able to locate and recruit some hidden gems that were still out there," Souers said. "We're excited about that, and I'm proud of the work our staff did to develop this class."

Most of Souers' recruiting class is homegrown with 14 of them coming from Montana. Some notable athletes come from the Hi-Line such as quarterback Mikkel Rider from Harlem, wide receiver Drake Berreth from Chinook and offensive lineman Trevin Grammar from Chester.

From Cut Bank, the Lights signed Brant Seewald as a linebacker. Another linebacker for the Lights will be Isaac Widder from Missoula. After being named second-team all-conference in his senior season, Polson's Kaden Nelson will join the Lights as kicker and a punter.

The Lights signed Stran Selman who played defensive back for Huntley Project and was an all-conference player his senior year. Another defensive back joining the program will be C.J. Smith from Browning. The Lights also grabbed defensive back Andreas Van Diest, who is transferring from the University of Providence.

"We wanted to bring a Montana presence to the program and a reflection of our intent and commitment to recruiting guys from this region," Souers said. "We were fortunate that we were able to get the number of guys that fit that mold."

The Lights also signed several players from out of state, including four from California. Transferring from American River Community College in Sacramento, John Toth will play defensive lineman for the Lights. Long snapper Greg Rivera will come from San Jose to join the program.

Several running backs will come from California to fill the Lights' backfield. Jamari Johnson will come from Colton while Kai Green will come from Pittsburg. The Lights also signed offensive lineman Rodney Laverdure, who is coming from Belcourt, North Dakota.

Along with making the program better, these new players should fill out the Lights' roster. Through spring ball, the Lights only had a total of 34 players participating in activities, so more players will help them run the drills they will need to do this summer to prepare for live football in the fall. Many of these new players will also have to step up early, but Souers expects them to be up the challenge.

"A lot of these guys are going to have to contribute fairly early and that's not any added pressure, it's just more opportunity for them," Souers said. "We got to figure out a way to implement our system with the guys that we do have. It'll be a challenge but we're going to rise to the occasion.