Havre Beneath the Streets fundraiser set for Friday 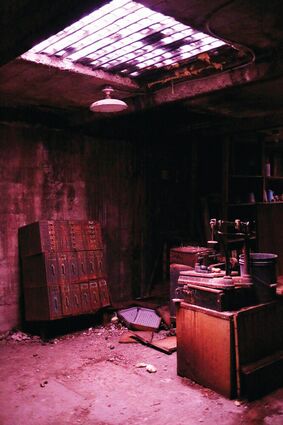 Natural light shines through prisms in a sidewalk on the 100 Block of Second Street Feb. 25, 2019, into a in Havre Beneath the Streets room closed due to damage caused by water leaking through the sidewalk. A fundraiser is set for Friday to raise money to help repair the sidewalk and the damage in the exhibits.

Beneath the Streets, a major tourist attraction in the area, displays Havre businesses, many more than 110 years old, in the basements and former steam tunnels under the 200 Block of First Street. Many of the displays use historical artifacts from actual Havre businesses.

Havre Beneath the Streets Office Manager Christy Owens said the event will be at the club with a no-host cocktail hour beginning at 6 p.m. and dinner at 6:30 p.m. with $35 tickets available at both the museum and the bar.

"Grab your hula skirts and have fun, come to the fun fundraiser," Owens said.

She said the event will help raise money for a long-needed project, repairing the Second Street sidewalk outside the club and exhibits in Beneath the Streets.

The sidewalk is one of the few locations left in Havre with prisms, which have darkened and discolored in the more-than 100 years they have been there, set into the concrete to refract light into the underground, originally basements and steam tunnels.

She said the sidewalk started to show signs of deterioration in 2017 and it's only gotten worse over time. In 2018 leaks damaged rooms with two exhibits and they had to stop giving tours in the area under that sidewalk.

Owens said it also affects handicap accessibility, so fixing the sidewalk is a big deal.

She said they are looking into a grant that may help them get started with repairs as early as 2023 if everything pans out, but it will require a match, which this fundraiser will help.

She said she thinks their application, which Bear Paw Development Corp. helped with, is strong and she's hopeful, but with grants there is never a guarantee and costs for such projects are climbing.

Owens said the club can only hold so many people but she's hoping between 200 and 250 people will come for the event which will feature pork and chicken for dinner and feature a live auction, a silent auction, a 50/50 raffle and a few different games.

She said a similar fundraiser for this same project was held in 2019 but they weren't able to do one in 2020 or 2021 due to the pandemic, so it hasn't had a chance to become an annual event yet, but they've still seen quite a bit of support from people in the area.

"We appreciate the community support," she said.