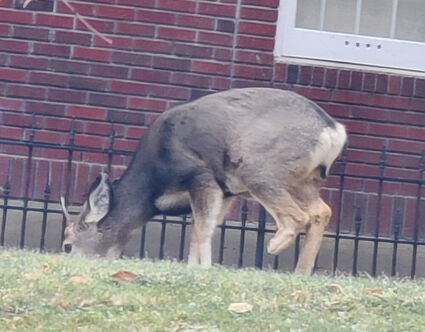 A deer that is missing part of one leg grazes in Havre earlier this year. The city has released the rules of an urban deer hunt, archery only, that opens this week. People with correct tags can, on a daily basis, ask for permission to hunt on several sets of city, state, and private-owned property in and near the city limits.

Havre's city government has released updated information on the urban deer hunting set as part of its urban deer management plan approved by the state, with the urban hunting season starting Thursday this week, Dec. 15, and running through Feb. 15.

The hunting areas have been approved and are online at the city website, https://www.ci.havre.mt.us .

The plan was developed by the city and Montana Fish, Wildlife and Parks after several years of discussion on how to deal with the growing population of deer living inside the city.