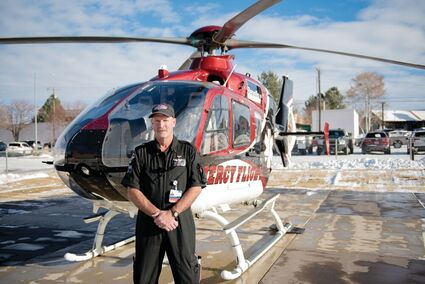 Flight Paramedic Mark Long, who has been on more than 2,000 missions with Mercy Flight, stands in front of a Mercy Flight helicopter. Long counted the rescue of three injured horse riders from the Bob Marshall Wilderness as one of the most interesting days of work. He only learned it was a multiple-injury incident while he was en route and a sow grizzly bear and her cubs watched the remote rescue. Mercy Flight, an air ambulance, has been in operation for 40 years.

​ For newborns in distress in rural hospitals, for travelers in car wrecks, for injured wilderness explorers, for farmers and ranchers wounded on the job, and for so many more Montanans and visitors, Mercy Flight has been a critical element of survival.

"Mercy Flight is a godsend," one Choteau dad said after his children were injured in a utility terrain vehicle accident. "I was happy to have them take my princess to Great Falls."

Before the program launched, crews fr...